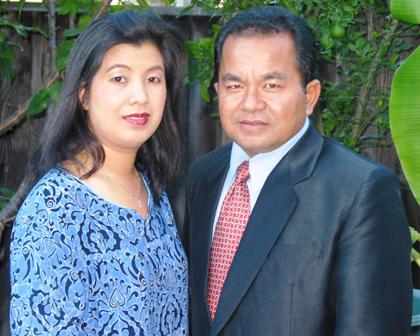 Paul and Nary Nuth
Name of Ministry: Cambodian Generations for Christ
Background: Paul was born and raised in Cambodia in a Buddhist family, where 95 percent of Cambodians still claim Buddha as their god. In 1973, Paul received the living Jesus Christ as his Savior and Lord. In 1975, The Killing Fields devastated Cambodia when three million Cambodians were killed-30% of the population! The Church, its people targeted for execution, survived though it was desperately weakened and fragmented, losing an entire generation of pastors and leaders.
In 1981, Paul and Nary were blessed to be able to escape from the terrible situation in Cambodia to freedom and eventually to the United States. They were married in 1986 and now have two children, Nicholas, 26 years of age, and Pauline, 23. In the U.S., Paul went to Bible school and worked with CityTeam Ministry for 21 years and Missions Door for 4 years. As a Church Planter, he planted churches and trained North American Cambodian Christian leaders. He has also assisted in the church planting work in Cambodia since 1990. Paul served as the pastor of a church he planted in 1983 in San Jose, California. He co-founded Cambodian Ministries for Christ and served as its mission coordinator through 2007. Recently, Paul has led the Cambodian national Christian leaders and several U.S. churches to form a new association of over 2000 churches called Cambodian Generations for Christ, focused on planting and establishing churches in Cambodia according to The way of Christ and His Apostles.

The Ministry: Paul and Nary, following the Holy Spirit by acting and obeying Christ's Great Commission, are committed to the evangelism of the lost, entrusting the truth to faithful men, and establishing the local church in the way of Christ and the Apostles. Their ministry is focused on establishing and expanding the church by working to provide church-based leadership in:

The Vision: Paul and Nary's passion is to see individual believers and whole churches strengthened and equipped to go into their communities bringing the Good News to the lost and disciple believers to maturity. They are committed to seeing this accomplished through "the way of Christ and the Apostles", working with indigenous leaders who in turn train others within the context of their own local churches, both in the U.S. and in Cambodia.

The Formation of the Ministry and the Vision.

The vision of Cambodian Generations for Christ is to reach Cambodia with the Gospel of Jesus Christ by planting self-sustaining churches and establishing those churches through training capable leaders, reaching generations of Cambodians to promote the welfare of the communities in which they live.